What are "Slide Guitar" and "Pedal Steel"? 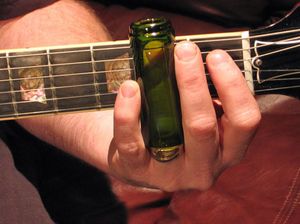 Slide or "bottleneck" guitar is a playing technique that was introduced by African blues artists in the 1920s when a cylinder (originally a bottle neck as shown here, hence the name) was worn on the finger and held against the strings to control string pitch instead of fingering the strings on the neck between the frets. This produces two results that are markedly different from fretting the instrument: 1) the pitch can now glissando, meaning to glide from one pitch to another, whereas frets provide fixed pitch (unless you bend the strings to change their tension and thus raise the note), and 2) since the slide has now assumed the role of a fret, the material from which the slide is made now has substantial impact on the tone the guitar produces. (Glass tends to produce less bass and very-high-end siblance and have little sustain, whereas metals, particularly brass, have more of both.)
Sound recording itself was in its infancy in the 20's, and a blues artist named Sylvester Weaver is credited with recording the first two known blues slide solo pieces, "Guitar Blues" and "Guitar Rag", in 1923. By far the greatest early credit, however, is given to and well deserved by Robert Johnson who was not only a landmark guitarist but a landmark singer and songwriter.
Slide guitar is often played on "open tunings", meaning that the strings are tuned as if a chord was already being played on the instrument rather than using the "standard" E/A/D/G/B/E  to which the instrument has traditionally been tuned. (You simply strum the guitar and you get a chord.) Two common examples are open A tuning (E/A/E/A/C#/E) and Open E tuning (E/B/E/G#/B/E), and I am fond of both of these; my performance history in wheels and most of my improvisational work (solos) have been done in open E but I favor open A for composing. 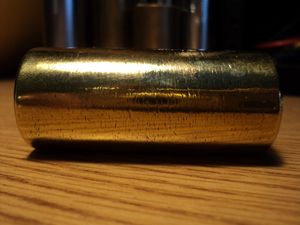 Here is my oldest slide, shown at left, and brass being the soft metal that it is, this slide has taken tens of thousands of hits from steel strings which have gradually given it a pebbled surface. This allows the slide to also act something like a violin bow, exciting the string when small vertical and horizontal movements are applied, allowing virtually infinite sustain. 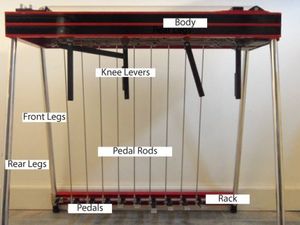 Pedal Steel is a far more mechanical contraption (it really is a contraption) that uses a metal bar held flat on the strings instead of a slide around the finger. It apparently started much earlier - in Hawaii in the 19th century (though the pedals came along much later), so it's interesting to speculate whether the original blues masters had already been turned onto it from Hawaiian music. There is also a hybrid of the two, commonly called "lap steel", where a guitar is laid flat and a bar is used on it (a sculpted metal bar for this is on the far right in the top picture and in the forefront of the bottom picture), but the distinction for pedal steels is that a complex mechanical undercarriage uses foot pedals and knee levers to change string tension by a calibrated amount equal to an exact pitch change for the affected strings, and most setups include a volume pedal for the right foot (not shown). This goes on simultaneously while the instrument is being played and - in the right hands (lol, and feet and knees) - can delight the ear as chord-to-chord resolution comes not only from the bar moving but from individual strings changing pitch at the same time. The undercarriage of my doubleneck Emmons is shown below. (My dad thought I'd lost my mind when I bought this one :-)) 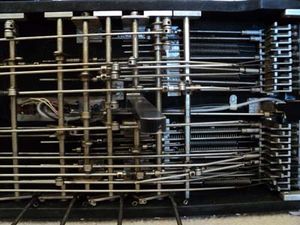 Pedal steel has been prominent in country music for decades – often that syrupy kind of wail behind the vocals or in a solo –  and was made famous by a host of great players like Lloyd Green , Doug Jernigan and more recently Paul Franklin, but the chordal complexity the instrument can manage should eventually take it into many other venues as proven by artists like Robert Randolph. The instrument most commonly has 10 or 12 string necks instead of 6 like the usual guitar, and the most common tunings are "Nashville E9th" and "C6th", both of which I have on my Emmons double-neck pedal steel which was built for me by the Emmons Guitar Company in 1974. (E9th is  B/D/E/F#/G#/B/E/G#/D#/F# and C 6th is C/F/A/C/E/G/A/C/E/G.)  Interestingly enough, the unique selection of floor pedals and knee levers that alter the pitch of the strings is highly personalized, and the charting of these individualized settings is called a Copedent, so a pedal steel is a very personalized instrument. And lest it seem incomprehensibly complicated, there is one golden rule that simplifies things a LOT: since you move the bar to play in different keys, you play the same way in every key, so when someone apologetically asks if "...we can play this in B flat", the answer is "I don't care!" 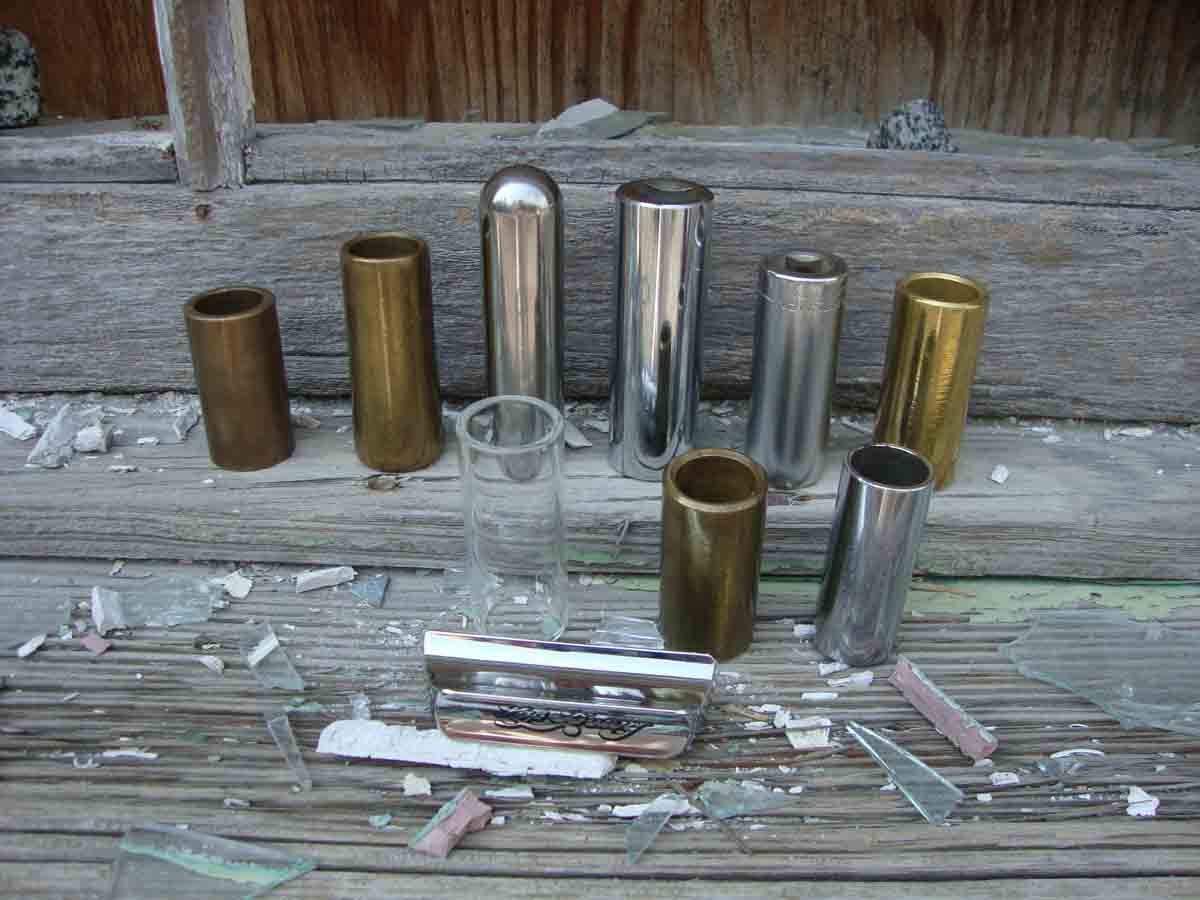